A new European creative centre has opened, bringing culture and space together in a striking synthesis. The new building is distinctive in design and location – its location is not in a big urban setting but in a village in Slovenia. 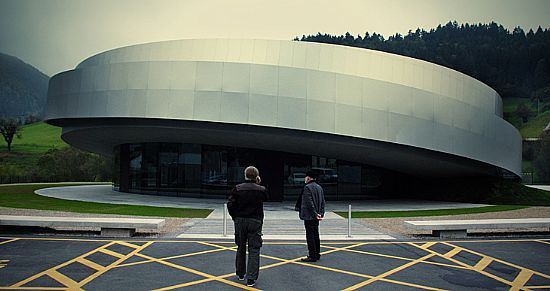 The building is formed from two low cylinders, the lower one rising from north to south

The aim of the centre is to revitalise the dream of exploration of space articulated by a visionary writer. He was Herman Potočnik, who wrote as Herman Noordung, and the centre has been built in the part of the country where his family came from.

Potočnik died in poverty in Vienna when only 36 – but he wrote a book which set out a practical vision for rocket flight, space stations and the exploration of space, which engineers after him developed into the familiar sights of today.

It was Potočnik who developed the idea of a wheel-shaped space station, rotating to create artificial gravity. He calculated an earth-circling orbit which would keep its position fixed in relation to the planet below. He developed designs for life support systems, devices to produce solar electricity, airlocks, space suits, and ways to tackle problems of health and fitness. 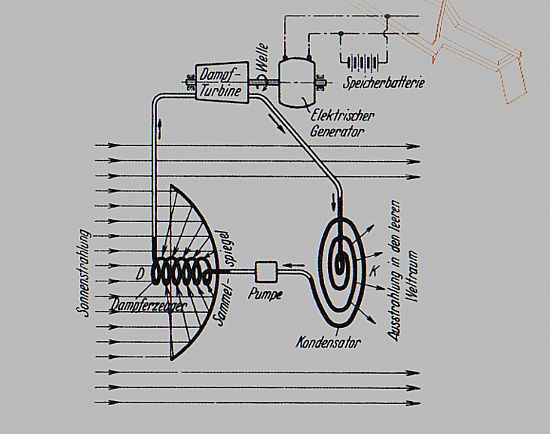 Potočnik’s family came from Slovenia – hence the location of the new space centre in the village of Vitanje where his mother and grandfather were born. Some miles away is Slovenj Gradec, the hometown of his father, a doctor and naval officer. Herman himself was born in 1892 in the Croatian harbour town of Pula, where his father was serving. Before the boy was two, his father had died, and his mother brought the family back to Slovenia, to the town of Maribor, a few miles from Vitanje. Herman went to primary school in Maribor, then on to military secondary schools in the Czech region of Moravia, and to military academy in Austria. There he graduated as an engineering second lieutenant, specialising in railways and bridges.

Influences of his childhood period are brought out in an exhibition in the new space centre in Vitanje. A space suit is compared with the diving suits of the time, a spacecraft with a submarine. The structures of a space station are shown alongside aspects of bridge design.

And a further background aspect comes from Herman Potočnik’s service in World War One. He was in the Austro-Hungarian army on the Soča front (the Isonzo to the Italians), the battlezone by the river where the armies clashed in a series of terrible confrontations amidst mountains and ice. The great artillery guns that were fired from the heights are compared with the design of rocket craft that he pictured for propulsion through space.

He contracted tuberculosis and was invalided out of the army in 1919, with the rank of captain. He studied electrical engineering in Vienna, and after gaining a doctorate specialised in rocketry. From 1925 onwards he devoted himself entirely to the concepts of rocket science and space technology, and at the end of 1928 published his only book The Problem of Space Travel – The Rocket Motor. (The publisher put the date as 1929 to make sure it looked new through the year ahead.) 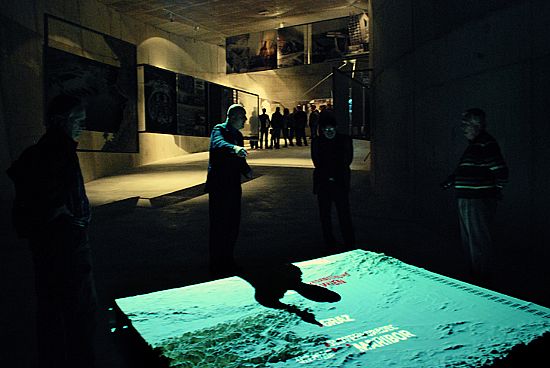 Downstairs, the outer area of the ring forms a powerful exhibition space

Potočnik’s vision of space was a peaceful one, with practical applications to benefit life on the earth. He set out clearly many of the satellite applications which are widely used today.

“Everything even down to the smallest detail on the earth’s surface could be detected from the space station using powerful telescopes,” he wrote. “We could scan unexplored lands, determining the make up of their soil. Detailed maps of any scale could be produced that would not be surpassed in accuracy even by the most conscientious work of surveyors and map makers. Important marine routes could be kept under surveillance in order to warn ships of impending dangers, such as floating icebergs, approaching storms and similar events, or to report ship accidents immediately.” 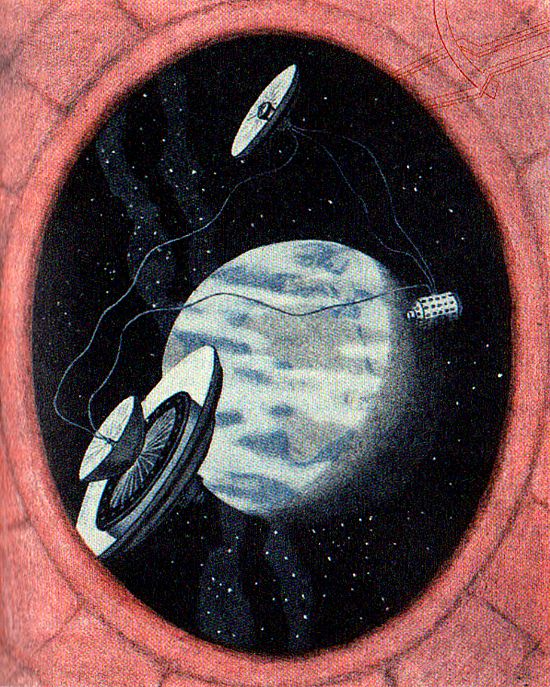 Potočnik’s drawing of the complete space station with its three units, seen through the door of a space ship

But for Potočnik himself in the depression years of the late 20s, the situation was hard. His health, worn down by war conditions and illness, was too poor for him to find a job or to marry. He lived with his brother in Vienna and died of pneumonia in 1929.

Some chapters of his book were translated within months of its publication by the American magazine Science Wonder Stories, but elsewhere there was little attention at first – except amongst the amateur rocketry societies in Germany. One of the people most influenced by his ideas was Wernher von Braun, who subsequently developed Germany’s wartime rocket missiles and after the war led the American space programme.

This image of a rocket as a ballistic missile has been driving the world’s space programme since the end of World War Two, with the way to the Moon and Mars seen as launching a missile directly from the surface of the earth. This was successful in getting a man on the Moon in 1969, but the sheer cost and complexity of the operation have meant that no one has been back there since, and the dream of manned exploration of the solar system has been pushed back time and again.

It has only been in recent years that the technological focus has shifted back to developing a series of ‘stepping-stones’. Private companies like SpaceX and Virgin Galactic have re-developed the concept of rocket planes into a low-cost system to lift people and freight into earth orbit. The next step will be to build a bigger space station in which rockets can be assembled and launched to the Moon and Mars – the launch from orbit being so much simpler and cheaper than the big haul up from the surface of the earth. This new approach is in fact simply a revival of the original vision expressed by the early pioneers.

Potočnik himself, who had seen the horrors of war in the battles of the Soča, was vehemently opposed to any military uses of rocket or space technology. Instead, he highlighted applications for the benefit of all humanity, and he also had a vision of exploration. “The most exciting prospects for remote observation from the space station exist for astronomy,” he wrote, noting that up there the light from the stars would not be weakened by the earth’s atmosphere and the background would be totally black. He described the exploration of the solar system and the dream of going beyond, to the closest fixed stars like Alpha Centuari.

“Conquering space!” he wrote towards the end of his book. “It would be the most grandiose of all achievements ever dreamed of, a fulfilment of the highest purpose: to save the intellectual accomplishments of mankind for eternity before the final plunge into oblivion.” 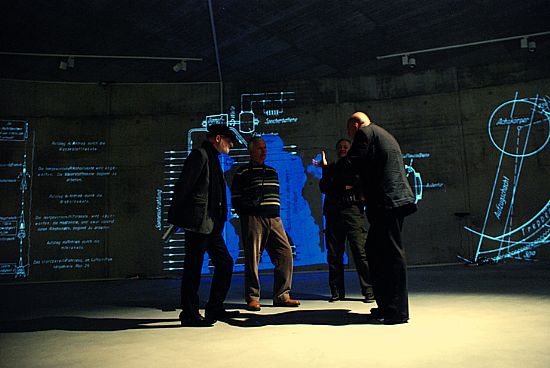 That vision is at the heart of the new space centre in Vitanje, a vision articulated by Slovenian theatre director Dragan Živadinov, one of the driving forces behind the project. He sees space, and Potočnik’s life, as a powerful stimulus for refreshing the view we see the world about us and for opening ourselves up to exploring the future.

Živadinov himself is a pioneering figure in European terms, bringing a variety of art forms together to create what he calls ‘post-gravity art’ – work that shifts perspective from life on the earth’s surface to a more cosmic context.

The aim of Živadinov and fellow artists Miha Turšič and Dunja Zupančič is to bring a new dimension into space – a cultural one. Space is often seen in military or commercial terms, and the vision of the three artists is to ‘culturalize’ it, to bring science and art together so that the exploration of space becomes part of a shared human heritage. In the new centre scientists and artists will work together, and workspaces for collaboration in periods of residence have been incorporated into the upper floor. 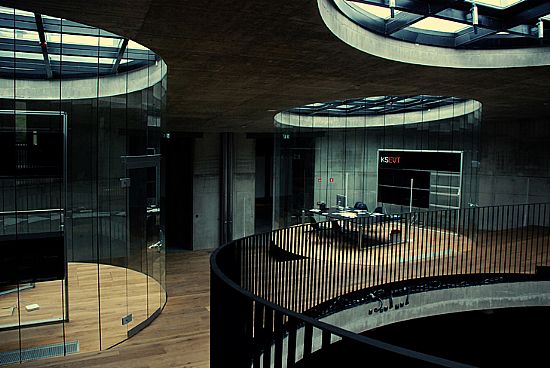 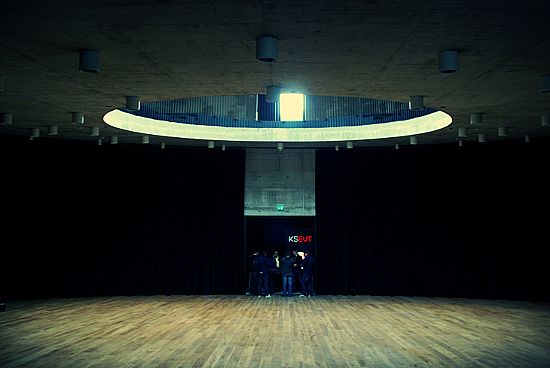 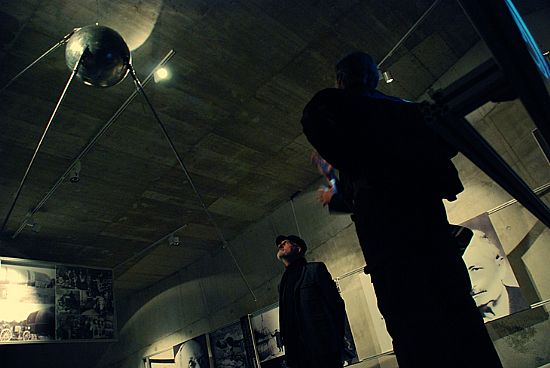 The design of the new centre is influenced by Potočnik’s drawings for a space stationm a great rotating wheel in orbit around the earth. The building is formed out of two low cylinders wrapped in aluminium, the lower one containing a circular hall with 300 seats for concerts or community functions ranging from weddings to choir practice. The building includes the village’s public library and facilities for local groups.

The roof area is a world of its own, where the surrounding hills, farm and churches seem suddenly close. The whole building is designed to fit into the landscape and the community, while at the same time reaching outwards to the new frontiers of space. 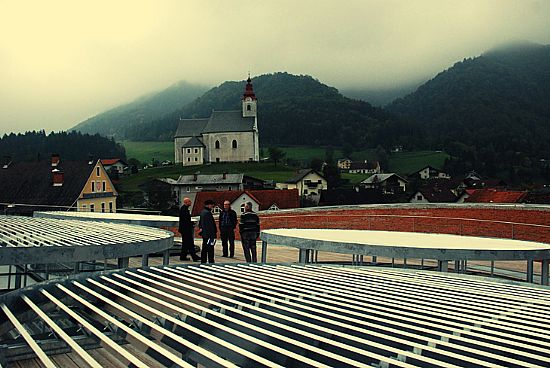 Out on the roof, where a terrace links the slopes of the two cylinders that form the building. This area can be used as an outer exhibition space or for reading at suitable times of year.

The building is located in a central position in the village, on the site of its former community centre, and in its first month has had over 6,000 visitors. The cost of the construction was approximately 2.8 million euros. Of this, 1.7 million euros came from European funding, with 300,000 euros from central government and 800,000 euros from the Municipality of Vitanje. 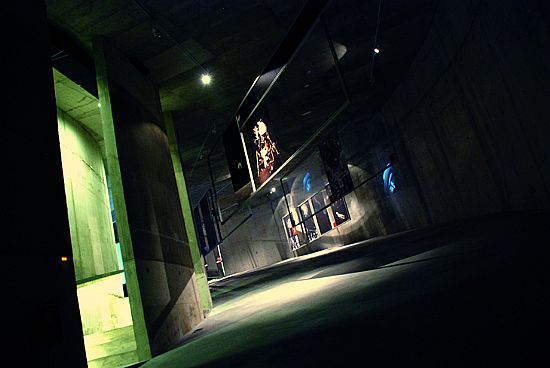 The design was developed by a team of four architectural companies working in collaboration. They say that the swirling shape of the exterior of the building is aimed at creating an illusion of rotation and floating in weightlessness. The concept is to express a great dream and open up new horizons. “The overwhelming greatness of the goal should make all the roadblocks still standing in its way appear insignificant,” wrote Potočnik in 1928 in the final sentence of his book, dying in poverty but looking up to the starry skies and dreaming of the day when humans would voyage among them, and the centre in the village of his childhood is designed to carry his inspiration to a new generation across Europe.